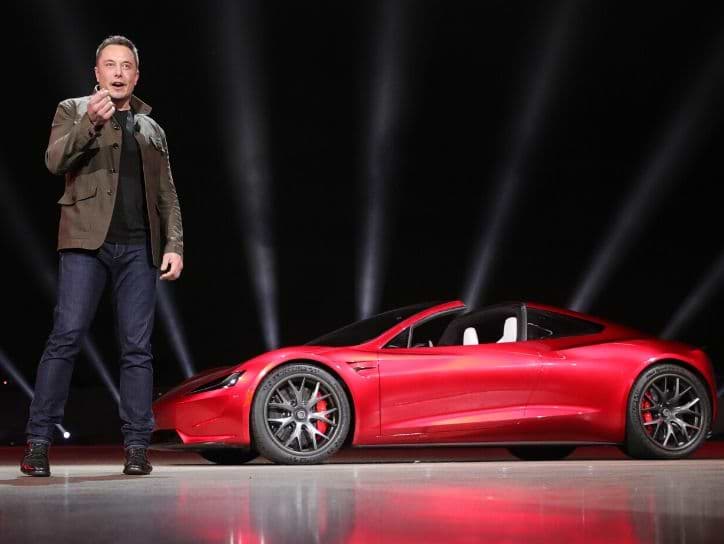 Fastest Tesla is the electric sports car; we all were waiting for so long! And guess what? Elon Musk revealed the much anticipated electric Roadster on 16th November 2017.

The point of Roadster is to give a Hardcore SmackDown to gasoline sports cars.

And as obvious, the Internet went crazy.

Not only the Roadster is the fastest in the world, or in Tesla’s stable, Elon Musk claimed that it is the quickest car in the world. Although, the manufacturer has to prove to later.

The Roadster is the successor to Tesla’s first production car, which was the 2008 Roadster. The electric car manufacturer has learned a lot from the previous generation and put aggressive efforts to make the fastest Tesla successful in the Electric automobile industry.

Fastest Tesla Car In The World 2020

So, what powers the fastest Tesla car?

So, What Makes Tesla Roadster Fastest & Quickest Electric Car In The World?

Starting with the heart of the sports car. The Tesla Roadster gets three powerful three-phase induction motors which is capable of generating endless torque.

The rear set of wheels comes in action with the help of 2 electric motors. Whereas, the remaining motor drives the front set of wheels via a differential mechanism. Well, wait if this was enough! The manufacturer has also planned ten gas thrusters as an option. Although, not conferment, Tesla will offer this option in the Founder’s edition Roadster.

You must be wandering the numbers, right?

According to Tesla, the electric motors of Roadster propels 10,000 Nm of incredible torque to the wheels. Although, the manufacturer has not clarified about the absolute numbers of max power & peak torque. However, at the time of reveal, Elon Musk has revealed the basic specs like 0 to 60, top speed, etc.

The Tesla Roadster is capable of accelerating from 0 to 60 mph under 1.9 seconds, which makes it the fastest Tesla in the world or competes with a bunch of other fastest cars in the world. Well, performance doesn’t stop here. The Roadster keeps picking up speed and does 0 to 100 mph under 4.2 seconds. Amazing, isn’t?

Tesla claims that the Roadster has a top speed of over 250 mph. Well, if Tesla proves speed numbers in real scenario, then yes, it will the fastest Tesla ever designed and manufactured.

To achieve and handle this mind-boggling speed, the manufacturer has fitted 3-speed transmission system. Here, two forward gear will help the electric sports car to reach top speed while the remaining acts as reverse gear.

In terms of drive range, the manufacturer promises to bolt a 200 kWh (730MJ) battery set, which will help the electric sports car to achieve 620 mph (997 km) per charge. If we believe these stats as promised by the manufacturer, then Tesla Roadster will become an electric car with the highest drive range.

According to Tesla Motors, the next-gen Roadster will the quickest Tesla ever. The electric car picks 0 to 60 in just 1.9 seconds. That’s said, it needs 8.8 seconds to reach 1/4 mile and does a top speed of 250 mph. Well, this is faster than any street-legal production electric car.

You should read: Fastest Electric Cars In The World

Well, as Elon mentioned in the reveal, there will be two variants of the Roadster. The base model will have the specs I already mentioned. Talking to founder editon, of course, it will be a performance version with extra features. However, it adds an extra $50,000 on the bill.

Talking of the dimensions of the Roadster, it seems longer than the predecessor. The overall length of the next-gen Roadster is 4200 mm as compared to 3946 mm. Width has been decreased by 127 mm and now measures 2000 mm. If you contrast both models, the height of the electric car has been updated to 1200 mm, which in but Elon Musk also earlier model was 1127.

You should read about the Fastest Mercedes In The World

Here, the only thing you will notice is the weight of Tesla Roadster. Now, it measures around 2000 kg, which is way more substantial than one has seen in the earlier model. Just for information, the 1st gen Tesla Roadster weighs 1220 kg. Although, the manufacturer has not revealed anything about wheelbase, legroom, front & rear track, etc.

Let’s discuss about the Tesla exterior & interiors in brief, shall we?

In terms of design, I felt that Roadster is one of the best looking Tesla. The exteriors come with a simple flowline, which indicates the minimalist work that has been followed throughout the Roadster.

If we look at the back, you will see slopping lines with sharp touches. Just below, there is black cladding that ends at both corners. A nice sporty touch by the manufacturer which was indeed unnecessary but, mind you, it doesn’t look that bad.

The electric sports car can accommodate 4 passengers. This can be possible with the help of removable glass roof.

Inside, you get calm and minimalistic artwork where everything is dope and high-tech. Of course, just like any Telsa model, it comes fitted with a big instrumental cluster screen which enables the owner to control everything by a single tap. From listing to Spotify to browsing maps, you will be able to navigate through all of the functions via this screen.

I can end up this thought by saying just one word – Ah-mazing. Tesla and the person behind the company “Elon Musk” both are so focused on the sustainable future. And this can be seen it the range of electric cars & trucks Telsa has designed so far.

Every vehicle the manufacturer has designed and manufactured are future proof and produces Zero emission. I think, being the fastest Tesla car, Roadster will change the perspective of gasoline-powered sports cars.

Just to mention – I’m waiting for the launch of Tesla’s fastest car – The Roaster. Drop a “YES” in the comment section if you are a Tesla fan.

How fast is the Tesla Roadster?

According to Tesla, the Roadster can go 250+mph.

Depends on the niche of cars, if you talk about electric only the yes. Tesla is one of the fastest car that runs on batteries.

Which is the fastest Tesla model in the world?

Next-generation Tesla Roadster is the fastest and the quickest Tesla in the world. Tesla has planned to launch the electric sports car in mid-2020.